As a keen golfer myself I was shocked when a good friend and member of my local golf club informed me that he had just been slapped with a $793.00 fine for using an unregistered “motor vehicle” on a highway.

My friend lives a short distance from our golf club (less than two kilometres) and does not own a trailer for his golf cart. Like many golfers he enjoys the benefits of living close to his course. There are no doubt many semi-retired and retired people in this State who have purchased a house close to a golf course so that they can nip down to the course on a whim for a bit of chipping practice, or to play social or more serious golf through the week or on the weekend.

The fine was a particular shock for my friend as he had actually approached VicRoads for guidance earlier this year about the legality of driving his golf cart on the road, and had been informed in writing that subject to certain conditions what he was proposing to do was perfectly legal.

Not only did my friend receive a traffic infringement notice for the above offence, but so did another member of the club on the same day. That member of the club was told by the police officer issuing the notice that her circumstances would be a test case.

If the interpretation of the law that the police officer is asserting is correct then there is the potential for thousands of golfers in Victoria who drive their golf cart to golf each week to also be fined $793.00.

What are the laws regarding the use of golf carts on a highway?

Firstly, a “highway” is defined under Section 3 the Road Safety Act 1986 (Vic) as meaning “a road or road related area”. The term “road” is later defined in the same section to mean:-

(a) an area that is open to or used by the public and is developed for, or has as one of its main uses, the driving or riding of motor vehicles; or

but does not include a place that is not a road by virtue of a declaration under subsection (2)(a).

In the same Section “road related area” is defined as—

(a) an area that divides a road; or

(b) a footpath or nature strip adjacent to a road; or

(c) an area that is open to the public and is designated for use by cyclists or animals; or

(d) an area that is not a road and that is open to or used by the public for driving, riding or parking motor vehicles; or

but does not include a place that is not a road related area by virtue of a declaration under subsection (2)(a);

Clearly the term “highway” is very broad in its scope and encompasses most footpaths, nature strips, cycling lanes, and car parks. It would be very difficult for most golfers to avoid driving their golf cart on a “highway” even by not directly driving on a road shared with cars. Even the car park of your local golf club, whether or not it forms part of the same portion of land that the clubhouse is on, could well be a highway.

So then, if you find yourself stranded on a “highway” by the police in your golf cart are you in fact using a “motor vehicle”?

Our view is that you are not, by virtue of a declaration made by the Government in the Government Gazette on 8 February 1993 under the same subsection (2)(b) referred to above. The declaration seeks to make it clear that certain classes of motor vehicles are not in fact “motor vehicles” for the purposes of the Road Safety Act 1986 (Vic).

A copy of the declaration is set out below:- 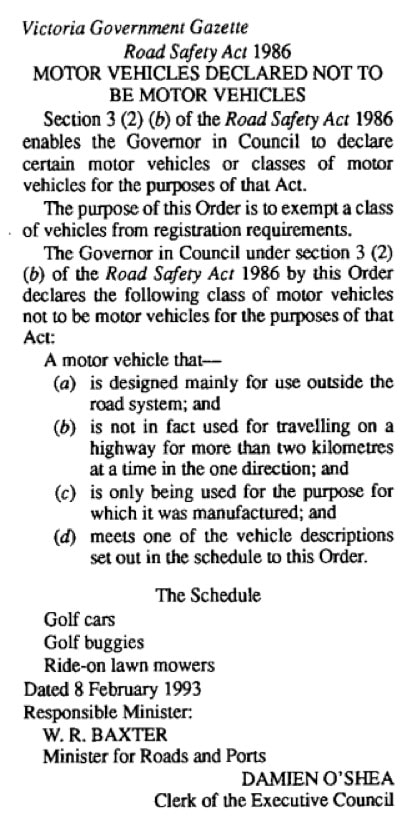 The key issues pertinent to my friend’s situation (and for most golfers who drive a conventional unmodified golf cart), is that for his cart to be excluded from the definition of "motor vehicle" it:-

In other words, it would be an offence for him drive his golf cart from his house along the street to a friend’s house to drop off a bale of hay because that would not be a use consistent with the purpose for which it was manufactured (ie. it is not being used for the purpose of playing golf).

It is possible that the police may argue that simply driving the golf cart on a highway (even only a distance of 50 metres along the golf club car park to the clubhouse) is inconsistent with the purpose for which the golf cart was manufactured because the driver is not actually playing a round of golf, and is merely preparing to.

I would consider such an interpretation of the law to be draconian and unfair, leaving golfers with no option other than to purchase an expensive trailer to bring their golf cart to the golf course and to park their trailer on the course proper.

Ultimately it is in the hands of Victoria Police to consider. Correspondence has been sent to the Senior Sergeant who is the superior of the police officer who issued the traffic infringement notices requesting that the notices be withdrawn.

If the notices are not withdrawn then this interesting and far-reaching issue will be a matter for a Court to determine.

Call 1800 641 743 to be connected to your nearest office, find an office near you on our office locations map, or email us using the form below and we will contact you on the same or next business day.